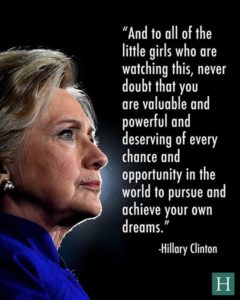 After a campaign season marred by unrelenting misogyny, Donald Trump defeated Hillary Clinton to become this country’s president-elect. Trump’s win stunned much of the country, but it also troubled many groups of Americans, particularly women. Trump’s sexist comments throughout the campaign worried many women all along. Over the past year and a half, it has been hard to ignore the numerous sexist comments that Trump has made throughout the duration of his campaign. He criticized Republican opponent Carly Fiorina’s face. He retweeted disgusting messages about Clinton and Fox News anchor Megyn Kelly. Not to mention, a tape from 11 years ago revealed that Trump talked about kissing and grabbing women without their consent. Given these comments, it’s hard to believe that Trump won Tuesday’s election, but you can now expect to see him inaugurated in January.

Marie Henein, one of the top Canadian criminal lawyers wrote an inspiring article,  “Thank you, Hillary. Now women know retreat is not an option” on what we need to take away as women from Hillary Clinton’s loss. Here is an excerpt which I think sums it up perfectly:

“So what did Ms. Clinton’s run tell us? That even a progressive society has difficulty embracing women in positions of power. That women decision makers and power brokers continue to be viewed with inherent suspicion. You can hold office, just not the highest one. You can succeed, just not too much. I’m going to say it; she lost because she is a woman. If she was a man, she would be president-elect today. Plain and simple.

Thank you, Hillary. Now women know retreat is not an option. – Marie Henein

The sky is not falling. It just feels a little darker right now. She is out there. I know it in my core. In some school. On some playground. In some boardroom. She may not even know it yet. And our collective job is to light the path so everyone else can find her. So thank you, Hillary. We know what we need to do. We will lick our wounds, buck up, and we’ll be starting a little further ahead because you ran.”  Read Marie Henein’s full opinion piece here.

So if the thought of President Trump in the Oval Office has you contemplating a move to Canada, think again. There are other, more healthful things for you to do than give up. Clinton and, to a lesser extent, Bernie Sanders, built up strong feminist momentum throughout their campaigns. Despite Tuesday’s results, that momentum shouldn’t go to waste.  Now it’s time to focus on next steps. Fortunately, you don’t have to wait until January to take action. And while it is, of course, OK to simply be still and feel whatever it is you’re feeling, there are things you can do right now if you feel like you’re crawling out of your skin.  Mercifully, this country has long had organizations that fight, every day, to empower women and keep them safe.  Perhaps consider this list (by no means exhaustive) of pro-women, pro-girls groups that can always use support. The Huffington Post also put together another great list of organizations that you can volunteer with or donate to which cover a broad range of issues (racism, climate change etc.) that could be negatively affected by a Trump Presidency  as well as help  groups of people (Muslim family and friends, minorities, immigrants etc.) who could be negatively impacted.

Bustle, has also put together a list of  simple-yet-meaningful feminist actions to combat Trump’s sexism matter more now than ever before.  Here are 37 feminist actions you can take right now.

My favorite course of action has been all the women, including celebrities like Amy Schumer who have donated to Plan Parenthood in Mike Pence’s name. The donations are, of course, ironic since Pence is an extreme anti-abortion, anti-LGBTQ evangelical Catholic. The new VP-elect has effectively led the GOP’s war on Planned Parenthood and completely defunded the women’s health organization in his home state of Indiana. He also plans on repealing Roe v. Wade.  Read more about that hilarious comeback here and read here for more info on how to donate.

Don’t forget, you can’t pour from an empty cup!

Check out our previous entitled, “How to practice self-care and cope with post election stress”. 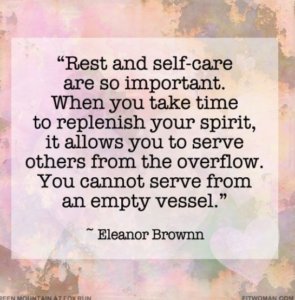