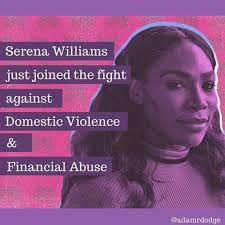 How can society prevent and fight domestic or intimate partner abuse? Traditionally, solutions tend to center on helping communities promote healthy communication and relationships. But far less discussed is the topic of money — and how finances can complicate abusive relationships, be used to abuse and terrorize their partners. and make it harder for victims to leave.

Tennis superstar Serena Williams hopes to pull the issue out of the shadows. By speaking out and adding her name to the cause, she’s trying to make more people aware of the perils of economic abuse and realize what they can do to help victims. “While I was familiar with financial abuse, I really didn’t realize that it happened in about 99% of domestic violence cases. That’s a pretty insane number. That’s basically every domestic violence case,” Williams said. “I was really surprised at how prevalent it was and underexposed the issue of financial abuse was. Because of that, I kind of wanted to encourage others to stand up and speak up and speak out about financial abuse.”
For a sense of how widespread the problem is, as Williams mentioned, nearly all domestic violence survivors — between 94% and 99% of them — also report some form of economic abuse, according to the National Coalition Against Domestic Violence. Victims of domestic violence lose eight million days of paid work each year, the coalition says. The cost of the abuse is more than $8 billion per year. One in four women will probably be affected by domestic violence at some point in their lives, and finances are often one of the top reasons women can’t leave an abusive relationship, experts say.
Williams joined forces with Allstate Foundation’s Purple Purse Campaign to help fight back against the cycle of domestic violence. Allstate Foundation has been working on ways to combat domestic violence for over a decade. This year, the foundation launched a new social-experiment based film called “Lost Purse” to help illustrate the issue of financial abuse and raise public awareness about it.
https://youtu.be/Q3pUlXtNgU4
Click here for the full article.

Our approach to the issue of domestic violence is much more comprehensive and inclusive as compared to the purview of other campaigns/organizations. We seek to examine and work to eradicate all the forms of domestic violence including FGM, physical, emotional and financial abuse, forced marriage, marital rape etc. Furthermore, it’s become more accepted that women can be abusers, not just of children but of men also whilst still acknowledging that domestic abuse is significantly a women’s issue with women 10 times more likely to be abused than men. We acknowledge these complexities in our campaign Free Yourself Global which is why our focus is on families and how the cycle of violence is passed down through generations and how domestic violence expresses itself differently across cultures.

One of our main objectives is to bring together all of the voices of the participants of domestic violence, including recovering abusers, victims, children, educators, support agencies and health professionals, law enforcement agencies, politicians, celebrities and social entrepreneurs who work to aid in this cause. We want to hear your story! You can share it with us today via social media using the hashtag #FreeYourselfGlobal, via facebook message or anonymously via our website freeyourselfglobal.com.