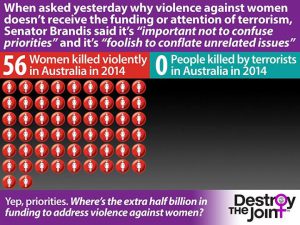 When news of an active shooter inside an elementary school broke on Monday morning, it triggered panic and alarm. For residents of San Bernardino, California, a community still reeling from the trauma of a terrorist attack that killed 14 people less than two years ago, it was as though a fresh wound had been ripped wide open. But as the details of the shooting emerged, it became clear that what took place inside that classroom was driven by domestic violence, not ideology. The story police told was as American as apple pie: A rage-filled man taking his wife’s life. The incident, however sad, would not inspire President Donald Trump to address the nation. It would not create pressure for politicians to act. It would not even start a conversation about the role of domestic abuse as a major driver of gun violence in the U.S. As HuffPost’s Michael Calderone documented, the story was already receding from the headlines by Tuesday morning. The country had moved on.

On Monday, Karen Elaine Smith was doing what she loved best ― teaching students with intellectual disabilities ― when her estranged husband walked into her classroom armed with a .357 handgun, police say. Cedric Anderson didn’t say a word. He “just shot everywhere” before reloading and killing himself, a child who witnessed the scene told the Los Angeles Times. Smith died. Two of her students were hit by errant bullets. One, 8-year-old Jonathan Martinez, died later that day. An 8-year-old and his teacher were dead. But the public breathed a sigh of relief: At least the shooting was not an act of terrorism.

That reaction ― or lack of one ― is misguided. The latest San Bernardino shooting was also an act of terror ― a much more common kind, with a much higher death toll: The kind women face when trapped in abusive relationships.

Control and Fear: What Mass Killings and Domestic Violence have in Common

One of the first things we learned about Omar Mateen, the gunman in the nightclub massacre in Orlando, Fla., was that his ex-wife said he had beaten her severely until she left him in 2009. If it sounds familiar that a gunman in a mass shooting would have a history of domestic violence, it should.

When Everytown for Gun Safety, a gun control group, analyzed F.B.I. data on mass shootings from 2009 to 2015, it found that 57 percent of the cases included a spouse, former spouse or other family member among the victims — and that 16 percent of the attackers had previously been charged with domestic violence. Social scientists have not settled on an explanation for this correlation, but their research reveals striking parallels between the factors that drive the two phenomena. Click here for a detailed explanation of their findings.

Our first of its kind, global domestic violence campaign, Free Yourself Global, strives to look beyond the  traditional abuser vs. victim perspective,  bad vs. good mentality by employing a family- focused approach which acknowledges and seeks to illuminate the  the complex and sometimes shifting roles played by the abuser/victim. We critically examine all the different types of domestic violence, their manifestations, the enculturation of this violence through generations and its repercussions in order to effectively understand and subsequently stop/ interrupt the cycle of violence. Our initiative hopes to bring together all of the voices of the participants of domestic violence, so whether you are a recovering abuser, victim/survivor and/or professional who works to aid in this cause, we want to hear your story. You can share it with us on social media using the hashtag #FreeYourselfGlobal or anonymouslyhere, via our website.