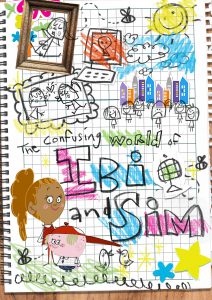 Hong Kong-based Transcendent Media Capital (TMC) and UK-based Animage Films have signed a joint venture deal to create a 2-D animated comedy series called “The Confusing World of Ibi and Sim”. Aimed at young people aged 10-15, the series will provide guidance as well as hysterically funny and relatable humour. Pre-production is planned for 2019.

The series will follow 13-year-old Ibi, 11-year-old Sim and their friends through comical adventures that are compounded when the adults in their lives intervene with embarrassing and funny results. The directors will work with young people in the UK, workshopping issues such as sexting, consent, boundaries, pornography, communication, gender and sexual identity, body image, LGBTQI issues, and blended families, to use real – life scenarios to drive script development.

“With the increasing rise of populist movements and the consequential roll back of sex education programs in schools, the issues Ibi and Sim face throughout the series reflect the realities today. We will be working with children during the script development phase because we want to understand their issues concerning sex and relationships and create something funny and relatable that will also provide guidance,” said Peta Milan CEO of Transcendent Media Capital.

“The Confusing World of Ibi and Sim” is created by the award-winning writer and director Ruth Beni, writer and performer Talia Randall, and award-winning director and producer Peta Milan; Alan Kerswell is the production designer.

Animage has been creating, developing and producing original films and programs since 1992. They are the filmmakers behind the acclaimed “All of Us” initiative focusing on cultural and religious tolerance and diversity and has now been workshopped in over 50 schools throughout the U.K. Ruth Beni of Animage Films and Oscar-nominated animator Erica Russell also created the informative short-film “The Secret Gardeners” highlighting the plight of children facing criminalization and prison after being forced by organized crime gangs to grow drugs. Over the last 10 years Animage Films have won 9 New York Festivals World Medals. In 2016 it received The United Nation Gold Medal Award for “Our Girl” – a film dealing with forced marriage. For more information visit: http://www.animageltd.com/

Notes to the editor:

According to Advocates for Youth, U.S. teens experience as many as 850,000 pregnancies each year, and youth under age 25 experience about 9.1 million sexually transmitted infections (STIs). By age 18, 70 percent of U.S. females and 62 percent of U.S. males have initiated vaginal sex. In low-resource countries the number of girls under 16 giving birth goes up to 2.5 million a year.2 Surveys have shown that only 1 in 3 (aged 15-24) knew comprehensively how to prevent HIV. A 2018 study by the BZgA and IPPF EN showed that although sex education is taught in many European schools, not all are compulsory and many do not follow the WHO Standards. Additionally, it showed that there is still much resistance in society because of the belief that early sexual education leads to early sexual contact, which according to notable international studies including from UNESCO has proven to be false.

Comprehensive sex education has been proven to be effective at assisting young people to make healthy decisions about sex and to adopt healthy sexual behaviors. Although the U.S. government has spent over one billion dollars supporting abstinence-only-until-marriage programs, they have not been shown to help teens delay the initiation of sex or to protect themselves when they do. Adolescents have a fundamental human right to accurate and comprehensive sexual health information.

With many governments not supporting sex education and many not following the standards set by the WHO “The Confusing World of Ibi and Sim” will fill a gap in many pre-teens education while being a source of entertainment. It will tackle issues such as sexting, non-consensual image sharing, consent, healthy boundary setting, pornography, gender identity, sexual identity, healthy communication, body image, LGBTQI issues, blended families.