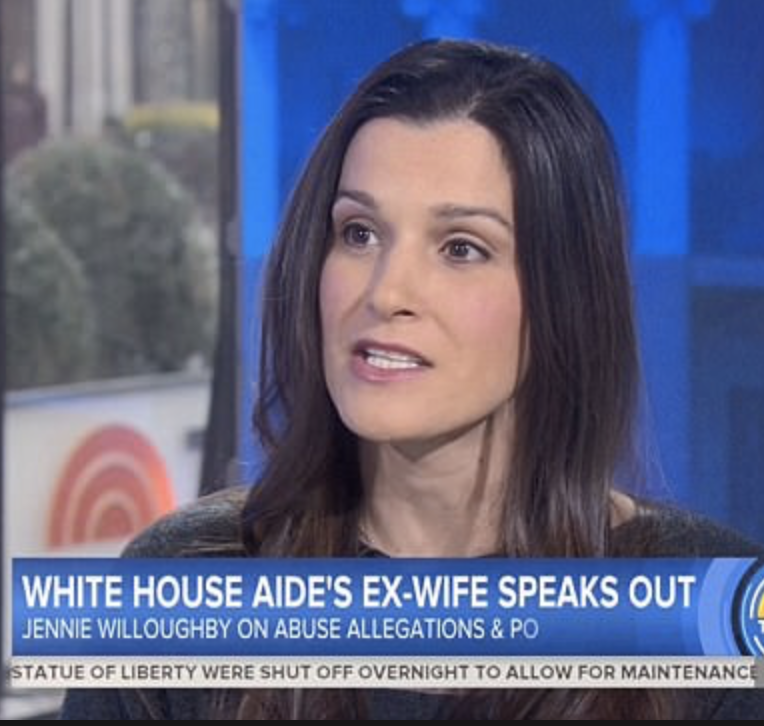 Last week two men in the White House were felled by domestic-violence allegations. One, David Sorensen, was a speechwriter; another, Rob Porter, a top aide. Porter had kept his job despite two ex-wives telling the FBI that he’d physically and mentally abused them. Both men would go on to resign—but on Friday President Donald Trump issued a statement in which he essentially defended Porter, emphasizing how he had declared his innocence, and then wished him well. The next morning the President characterized the words of Porter and Sorensen’s ex-wives as “mere allegations.”

Now Jennie Willoughby, the second ex-wife of Porter’s and a former school teacher, has responded to the President’s denial in a powerful essay for Time. In it, she speaks to the difficulty of stepping forward with allegations, the persistence of not being believed, and of remaining resilient in spite of it.

In her piece, she also called out deeper social norms that make it far easier to avoid addressing our collective culture’s “worst secrets” than to confront them.

Click here for the full article by KRYSTIN ARNESON.

Read some excerpts from Jennie Willoughby’s essay below:

If someone finds the strength and courage to come forward, he or she is to be believed. Because that declaration only came after an uphill battle toward rebirth.

I think the issue here is deeper than whether Trump, or General John Kelly, or Sarah Huckabee Sanders, or Senator Orrin Hatch, or Hope Hicks, or whether anyone else believes me or defends Rob. Society as a whole has a fear of addressing our worst secrets. (Just ask any African-American citizen). It’s as if we have a societal blind spot that creates an obstacle to understanding. Society as a whole doesn’t acknowledge the reality of abuse.

The tendency to avoid, deny, or cover up abuse is never really about power, or money, or an old boys’ club. It is deeper than that. Rather than embarrass an abuser, society is subconsciously trained to question a victim of abuse. I would call it an ignorant denial based on the residual, puritan, collective agreement that abuse is uncomfortable to talk about.

Amidst the recent rash of sexual assault revelations born of the #MeToomovement, even I found myself questioning the accuser. I almost allowed my societal conditioning to override what my heart knows to be true: Abuse is scary and demoralizing and degrading. It chisels away at your self-esteem and self-worth until you are unsure whether your version of reality is valid or not.

We are at a critical moment in history and there are three things I know to be true:

Where there is anger, there is underlying pain.

Where there is denial, there is underlying fear.

Where there is abuse, there is cover-up.

And for any men, women, or children currently in situations of abuse, please know: