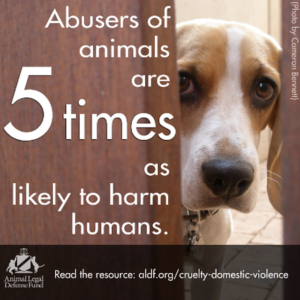 Domestic violence affects people of every race, gender, economic status, educational background, sexual orientation, religion, and nationality. This month, as you mourn those who have been lost to violent partners and work with your local domestic violence shelters to come up with workable solutions that save more men, women, and children, DogTime.com urges you not to forget the four-legged victims of domestic violence — the canine and feline family members who can get lost in the shuffle, left behind, and can even lose their lives at the hands of an abuser.

Abusers exercise power and control through the physical, psychological and emotional torture of victims who abusers know to be defenseless. The same power and control-based abuse is found across the spectrum in instances of child, elder, spousal, animal, or sexual abuse. When a person or animal is being abused in the home the possibility of other forms of violence occurring in the home should be considered as well. In reality, violence is not isolated. Compartmentalizing violence (the silo approach) merely hinders the victims and those who work to help them.
According to Sheltering Animals & Families Together (SAF-T), the first global initiative dedicated to helping domestic violence shelters develop a plan to house families and pets together, there are 1.3 million victims of domestic violence every year. A whopping 85 percent of those victims who enter domestic violence shelters say their abusive partner had threatened or followed through with their threat to injure or kill the family pet. Pets are especially important to victims in violent relationships as they provide a strong emotional connection and are often the only source of support for victims in times of fear and isolation. Abusers use the vulnerability of animals to control their victims and keep them in violent relationships. When animals are at risk of violence, children and women are at risk too.

Canadian research indicates that mote than 40% of women experiencing domestic violence and who own pets significantly delay their escape to safety if it means leaving a pet behind.

But despite this issue, most domestic violence shelters only take humans — no pets are allowed. In 2013, the Urban Resource Institute (URI) bucked the norm by launching a pilot program called URIPALS (People and Animals Living Safely) to accept pets at their Urban Women’s Safe Haven Shelter. It became the first domestic violence shelter in New York City to accept pets, and one of only a few in the country. URI expanded the program to accept dogs as well as cats and “pocket animals” after working with partners to create a shelter dog park in March of 2014.

Children and animals that are abused often share similar experiences of abuse. Children feel powerless against abusers and some children find their own victims over which to practice control. Therefore, some children who grow up with violence are motivated to harm animals. Children who abuse animals are often mimicking the abuse they have been exposed to or experienced themselves, protecting their pet from abuse or practicing their own suicide. Children may also have been forced to harm animals to coerce them into silence about the abuse they experience. Therefore when a child is being cruel to animals it must not be disregarded as the exploratory stages in a child’s development. A deeper understanding of the reasons behind why a child is behaving in this way must be explored.

Understanding and addressing the connection between animal abuse and human violence can better protect victims, arrest those who commit violent acts and prevent future abuse by identifying those with violent tendencies.  If we do not address the connection between human and animal violence we will continue to allow pet ownership to act as a barrier for victims of violence.