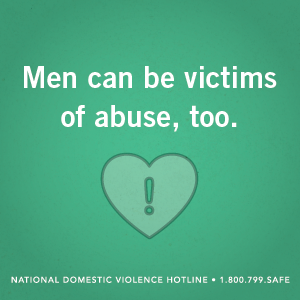 ‘Poison Ivy’, as she is known online, reportedly hunts down “socially awkward” men in online gaming communities and bullies them into sexually humiliating themselves. She then encourages the men to commit suicide. In a YouTube video posted two days ago, one of Hanna’s victims pleads for people to report her to the abuse will stop. The video has been watched 400,000 times in just 48 hours. Yet she does not seem worried or bothered about people saying she needs to be reported and taken down, and even retweets messages to that effect. Her twitter account even includes a number of instances of Hanna acting proud about the effect she has on the men and encouraging them to commit suicide. Read the full article here.

If you’re a man in an abusive relationship, it’s important to know that you’re not alone. It happens to men from all cultures and all walks of life.

When we discuss intimate partner violence/ domestic violence, it is often assumed that the victims are women. And the statistics are truly traumatic. The less-told story is that a striking number of men are victims, too, suffering physical, mental and sexual abuse in both heterosexual and same-sex relationships. According to the CDC, one in four adult men in the U.S. will become a victim of domestic violence during his lifetime. That’s upwards of three million male domestic violence victims every year, or one man in America abused by an intimate or domestic partner every 37.8 seconds. In Australia, at least one in three victims of family violence is male. Highlighting these statistics is not meant to downplay in any way domestic violence among women. It is, however, intended to add to the growing conversation that anyone can be the victim of domestic violence and everyone who needs protection deserves access to it.

However, men are often reluctant to report abuse by women because they feel embarrassed, or they fear they won’t be believed by their family and friends. An abused man also faces a shortage of resources, skepticism from police, and major legal obstacles, especially when it comes to gaining custody of his children from an abusive mother.

An abusive wife or partner may hit, kick, bite, punch, spit, throw things, or destroy your possessions. To make up for any difference in strength, she may attack you while you’re asleep or otherwise catch you by surprise. She may also use a weapon, such as a gun or knife, or strike you with an object, abuse or threaten your children, or harm your pets. Of course, domestic abuse is not limited to violence. Your spouse or partner may also:

No matter your age, occupation, or sexual orientation, though, you can overcome these challenges and escape the abuse.

Abused men can reach out to the following organizations for help: