Those who have never been in an abusive relationship struggle to understand how people remain in one for so long. If somebody was mistreating you, “why did you stick around?” they ask.

It starts with an off-hand comment here, or an insult there, but often victims brush these moments off. This is because abusive people are great at pretending to be everything you’re looking for in a partner, and they love bomb you with affection. Victims tend to believe this is the abuser’s real self, and when the mask starts to slip more and more, they believe its “out of character” and it must be their own fault for making their partner angry.

People stay in these relationships partly because they are trying to win back the abuser’s affection. However, Thomas told Business Insider that victims also become biologically attached to their abusers through something called “trauma bonding.” 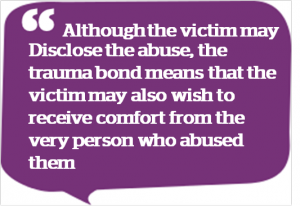 It’s a bit like becoming addicted to a drug. A psychologically abusive relationship is a rollercoaster, with punishment and then intermittent reinforcement of kindness when you “behave.” This means the body is going through its own turmoil, with high levels of the stress hormone cortisol, paired with dopamine when given affection as a reward.

“You have this back and forth, and the body becomes addicted,” Thomas said. “When we’re looking for something that we want, that we once had, which is a connection with somebody, and they are playing cat and mouse where they are pulling it back and forth, then the body really does become dependent on having that approval.”

These are the signs you might be in a trauma bond with someone, according to Psych Central:

We are conditioned to believe abuse is always physical. On TV and in films, we see characters who are obviously evil. They are violent to their partners, shout at them aggressively, or even murder them in a fit of rage. While this does happen, it’s not a true representation of the abuse many others experience. Our global domestic violence campaign Free Yourself Global is actively challenging this myth by bringing together all of the voices of the participants of domestic violence in order to give a more true representation of domestic violence in all its manifestations and from all perspectives. When all stakeholders come together in a grass roots forum, we strengthen our ability to understand, address, and end the cycle of domestic abuse.

Funded by a combination of private equity funding and corporate sponsorship, this campaign is an example of social entrepreneurship in action. For more information on how to become involved in this breakthrough campaign, email info@freeyourselfglobal.com