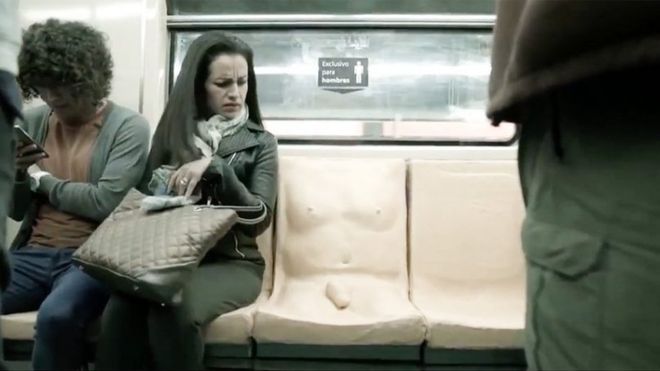 Women who regularly commute on public transit are all too familiar with the sexual harassment experienced by female passengers. In fact, in New York City alone, more than 458 sex crimes were reported during the first half of 2016. And so, to shine a spotlight on this horrible (yet common) problem, a new style of subway seat was recently installed in Mexico City’s metro system: a penis seat.

A “men only” seat molded in the shape of a man’s torso — including a prominent penis poking up from the seat — was installed on the city’s Number 7 train line, with a sign on the floor in front of it that read, “It is annoying to travel this way, but not compared to the sexual violence women suffer in their daily commutes.” The seat is part of a campaign launched by UN Women and the Mexico City government, called #NoEsDeHombres (a rough translation would be “this isn’t manly”), which seeks to highlight sexual violence on public transportation.The campaign is aimed at men, both with the video ads and with newly unveiled print ones that show guys giving lascivious looks with slogans like “this is how your mother gets looked at every day.”

“We wanted to do something different, we wanted to target men because on a global level, the majority of programs talking about sexual violence or sexual harassment always target women and girls. We wanted to change that because we don’t think that women are the problem.” – Yeliz Osman, a program coordinator with the Mexican UN Women office.

The Mexican government has reported that 65 percent of women in Mexico City have been sexually harassed on the city’s metro system, according to AdWeek. The campaign has now released a video titled “Experimento Asiento” — “an experiment with a seat” — that has had more than 800,000 views on YouTube since March 20. It shows people reacting with a mixture of discomfort and shock throughout. The video also states, “9 out of 10 women in Mexico City have been victims of some form of sexual violence” generally. According to a national survey done in 2016 by the Mexican Institute of Women, Inmujeres, nine out of 10 women or girls who use public transportation feel unsafe while doing it. A wide-ranging Reuters survey done in 2014 also showed that the Mexico City transport system is the second-most dangerous for women overall out of 15 world capitals. However, Mexico City was squarely in first place for specific questions like “have your been verbally harassed?” or “have you been groped?“

“In order to generate change, you need to create empathy…The idea is that men can get a sense of what it is all like. By creating empathy, we hope that this might change their behavior.” – Ms. Osman

The BBC notes that the campaign has been met with mixed responses, with some people applauding the idea and others complaining that it is “sexist” and unfairly targets men. However, Holly Kearl, founder of the US-based Stop Street Harassment campaign, told the BBC, “Too often initiatives around women’s safety focus on what women should or should not do, so it is refreshing to see a creative campaign aimed at men.”

Like the proponents of the #NoEsDeHombres campaign, we also subscribe to the belief that in order to create change, you need to create empathy. At Transcendent Media Capital, we specialize in utilizing innovative methods like Mexico City’s “Penis Seat” to further engage and elicit empathy from audiences on environmental and social issues.  One of our current main projects is, Free Yourself Global.  This global domestic violence campaign is the largest story curating exercise of its kind and employs convergent media strategies to explore the enculturation of violence through families across the globe, and how does one, whether the abuser or the abused, interrupt the pattern of violence? Our initiative hopes to bring together all of the voices of the participants of domestic violence, so whether you are a recovering abuser, victim/survivor and/or professional who works to aid in this cause, we want to hear your story. You can share it with us on social media using the hashtag #FreeYourselfGlobal or anonymously here, via our website. For more info on how you can choose to tell story and how it will be used to help other people in need, or to learn how to become involved in other ways with this breakthrough campaign, email info@freeyourselfglobal.com. To simply keep up to date on our campaign and the latest news pertaining to domestic violence worldwide make sure to follow us on Facebook and Instagram.