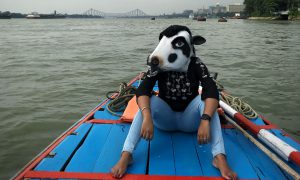 Indian women are posing in cow masks as part of a provocative photographic series that asks: is it safer to be a sacred animal in India than a woman? The gang-rape and murder of a Delhi student in 2012 sparked a national conversation about violence against women but, more than four years later, police statistics show reported rapes and molestations have not significantly fallen in the capital. At least six rapes and 12 molestations were reported daily in 2016. The conviction rate for sexual offences has declined, from about 50% in the year of the infamous Delhi attack, to less than one-third last year.

Women’s groups attribute the stubbornly high rates to deeply entrenched patriarchal attitudes, poorly trained or insensitive police and inadequate street lighting and CCTV cameras in parts of the city. Over the same period, there has been a surge in violence against religious minorities and low-caste Hindus in the name of protecting cows, an animal revered by many.

“I am perturbed by the fact that in my country, cows are considered more important than a woman, that it takes much longer for a woman who is raped or assaulted to get justice than for a cow which many Hindus consider a sacred animal,” – Delhi-based photographer Sujatro Ghosh told the BBC. 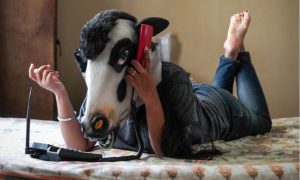 The two trends are juxtaposed in Kolkata artist Sujatro Ghosh’s latest project, which features women wearing cow masks posing outside landmarks, on trains, or lounging about in their homes. “The core issue is women’s rights and protection,” he said. “I’m not against protecting cows, I love animals. But I’m concerned about my country’s sociopolitical scenario.” Ghosh said the project highlights the contrast in attitudes towards women and cows, while showing solidarity with the victims of both male and mob violence.

“Actually fighting with these politicians or extremist groups physically was never an option … so my primary intention is to create awareness among people.”

Transcendent Media Capital also develops its own global campaigns which combine a range of media assets and grass roots action as well as collaborations with NGO’s globally to inform, educate, challenge myths and stereotypes and to create practical projects that contribute resources to solving issues globally. We employ convergent media strategies to maximise returns and reduce risk exposure for investors by commercialising stories across media platforms in a range of formats. Current projects range across issues such as domestic violence, mental health, illegal sex trafficking, ethnic cleansing, and youth at risk to name a few.

Our global domestic violence project, Free Yourself Global is much more comprehensive and inclusive as compared to the purview of other campaigns/organizations. Using a holistic approach we are examining all aspects of this complex issue, including the root factors and family dynamics that contribute to perpetuating a cycle of violence that is passed down through generations. Furthermore, it is also our contention that in order for people to better understand these types of abuse, they need a three-dimensional view of all those involved. That is why our holistic approach also examines the complex and sometimes fluid roles between victim/ abuser and acknowledges the need to not only provide support for recovering abusers as well as victims but to also include all participants in the dialogue. It is our view that when all stakeholders come together in a grass roots forum, we strengthen our ability to understand, address, and end the cycle of domestic abuse.

­ For more info on how you can choose to tell story and how it will be used to help other people in need, or to learn how to become involved in other ways with this breakthrough campaign, email info@freeyourselfglobal.com. To simply keep up to date on our campaign and the latest news pertaining to domestic violence worldwide make sure to follow us on Facebook and Instagram.