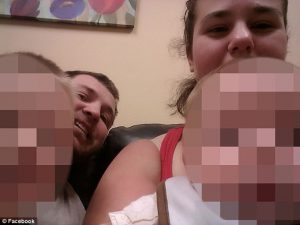 An Oregon couple has been fighting a legal battle after they lost custody of their two kids because both were designated not intelligent enough to care for them in a safe and proper manner.

A relative to the couple initially expressed concern in a complaint to authorities regarding the Christopher’s well-being under the care of Fabbrini and Ziegler, according to the Oregonian. A child welfare report alleged Ziegler had been ‘sleeping with the baby on the floor and almost rolled over on him.’ Fabbrini’s father, Raymond, said he and his wife were acting as the primary caregivers at the time, because he believed his daughter did not possess the ‘instincts to be a mother.’ After taking a required IQ test, Ziegler scored a meager 66 and Fabbrini a 72. The IQ of the average person ranges anywhere from 90-110.

Board member of Healthy Families of the High Desert and advocator for the couple, Sherrene Hagenbach, said the decision to place Christopher and Hunter up for adoption lacks substantial ground work and may be even more detrimental to the family as a whole. ‘They are saying they are intellectually incapable without any guidelines to go by,’ Hagenbach said. ‘They’re saying that this foster care provider is better for the child because she can provide more financially, provide better education, things like that.

‘If we’re going to get on that train, Bill Gates should take my children. There’s always somebody better than us, so it’s a very dangerous position to be in.’

Domestic abuse and neglect were not factors in the custody case.

There has been conjecture in scientific literature over the past decade about the suitability of IQ as a complete measure of intelligence despite that, it is being used in our society, often to the detriment of people who don’t meet it’s standards.   This article raises some important questions – what impact how does a low IQ have on day to day decision making (if any), given these skills are not assessed on an IQ test and subsequently what affect (if any) does a low IQ have on a persons ability to parent? Furthermore, at what point do we deem it okay to take a child away from the parents especially where there is no evidence of abuse or neglect? What about parents who measure high on IQ tests yet abuse their family members or who lack the sufficient emotional intelligence to properly adhere to their needs? This is opening up a huge debate from a legal, political, scientific and ethical perspective.

At Free Yourself Global we take a very comprehensive approach to the issue of domestic violence. Our campaign seeks to examine all types of abuse across cultures, its root causes in order to better understand and address this issue worldwide.  Specifically, this campaign explores the enculturation of violence through families over generations, and how does one, whether the abuser or the abused, interrupt the pattern of violence? We recognize that there are many different types of abuse that are not physical and the affect abuse can have on a child in developing and maintaining future relationships. IF a low IQ does affect a person’s ability to parent,  will being separated from their parents and placed in foster care be less detrimental to the child than being raised by caring but “incapable” parents?

What are your thoughts on this issue?