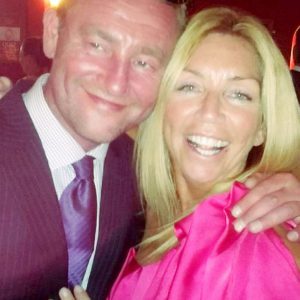 A “loving” dad who was fatally stabbed in the heart by his partner had suffered a history of domestic abuse at her hands. But police have revealed 43-year-old David Butterfield had never reported the violence he suffered. Michelle Spencer was due to go on trial over the murder of David Butterfield, but changed her plea to guilty before the trial started on Wednesday. The 48-year-old was jailed for 13 years for stabbing her 43-year-old partner in the chest with a kitchen knife.

‘No one, women or men, should suffer domestic violence and I would encourage victims of such incidents to contact the police or Victim Support as soon as possible.’

Michelle Colborne QC, defending, said it was a “momentary loss of temper” adding: “A minor disturbance resulted in this shocking incident and that Spencer had struggled to grasp what she had done and always described Mr Butterfield as the ‘kindest, most loving man’.

While the majority of domestic violence victims are women, abuse of men happens far more often than you’d probably expect. Typically, men are physically stronger than women but that doesn’t necessarily make it easier to escape the violence or the relationship. An abused man faces a shortage of resources, skepticism from police, and major legal obstacles, especially when it comes to gaining custody of his children from an abusive mother.If you’re a man in an abusive relationship, it’s important to know that you’re not alone. It happens to men from all cultures and all walks of life. Figures suggest that as many as one in three victims of domestic violence are male. However, men are often reluctant to report abuse by women because they feel embarrassed, or they fear they won’t be believed, or worse, that police will assume that since they’re male they are the perpetrator of the violence and not the victim. No matter your age, occupation, or sexual orientation, though, you can overcome these challenges and escape the abuse.

Our approach to the issue of domestic violence is much more comprehensive and inclusive as compared to the purview of other campaigns/organizations. We seek to examine and work to eradicate all the forms of domestic violence including FGM, physical, emotional abuse, forced marriage, marital rape etc. It’s become more accepted that women can be abusers, not just of children but of men also whilst still acknowledging that domestic abuse is significantly a women’s issue with women 10 times more likely to be abused than men. We acknowledge these complexities in our campaign Free Yourself Global which is why our focus is on families and how the cycle of violence is passed down through generations and how domestic violence expresses itself differently across cultures.  In order to address th se questions, we employ a holistic approach which examines the complex and sometimes fluid roles between victim/ abuser and acknowledges the need to not only provide support for recovering abusers as well as victims but to also include all participants in the dialogue. It is our view that when all stakeholders come together in a grass roots forum, we strengthen our ability to understand, address, and end the cycle of domestic abuse.

Regardless of whether you are a victim and/ or recovering abuser and/ or professional working in this field – we want to hear your story! Share it with is anonymously via our website www.freeyourselfglobal.com or via social media using the hashtag #FreeYourselfGlobal. For more information on how to become involved in this breakthrough campaign, email info@freeyourselfglobal.com