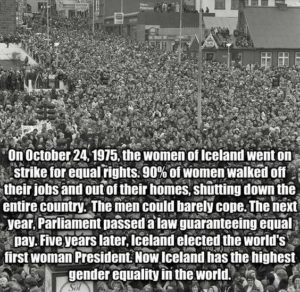 On October 24, 1975, 90% of Iceland’s women refused to work, cook or look after children in a demand for equal rights. But 30 years later there is also a feeling of disillusionment. Bjornsdottir, the pregnant college girl who now handles PR for the educational sector of the City of Reykjavik, is sad that her daughter has not benefited more from what happened. A statistic much flaunted these days is that Icelandic women earn on average only 64.15% of men’s wages. So the women of Iceland took to the streets again on October 24th 2016, putting Thor to shame with a thunderclap of their own, after they walked out of their jobs early to protest the gender pay gap. Women across the country left work at 2:38 p.m., with many gathering in front of the Icelandic parliament in Reykjavik for a massive demonstration. The gathered women called for equal pay, and showed their passion with a thunderclap – a communal clap that became associated with Iceland during the Euro 2016 soccer tournament.

The timing of the walkout was significant because 2:38 p.m. marks the time when women start working for “free” during a regular day, when the pay gap is factored in. Organizers say Icelandic women earn between 14 and 18 per cent less than men for the same work, on average. The Icelandic Confederation of Labour party organized the walkout and the rally. The party says the gender pay gap has widened in Iceland since its financial collapse in 2008.

2:38 p.m. marks the time when women start working for “free” during a regular day, when the pay gap is factored in.

The World Economic Forum predicted in its annual Global Gender Report this week that the world is 170 years away from closing the economic gender gap. The report ranked Iceland 11th in terms of wage equality for similar work. “Iceland has closed approximately 12 per cent of its total gender gap, making it one of the fastest-improving countries in the world,” the report said. However, it adds that “there remains an income gap to close.” Iceland ranked first overall on the report’s global gender gap index, which incorporates other factors like health, education, economic opportunity and political empowerment. Canada ranked 35th overall on the index, and 68th in the rankings of wage equality for similar work.

The World Economic Forum also ranked Icelandic women as the most educated and politically empowered in the world, as they demonstrated on Monday. Read here for the full article.

The Gender Gap and Domestic Violence

When woman do not make as much money as their partner, they face more barriers when trying to leave an abusive relationship. According to the National Network to End Domestic Violence, concerns about their ability to support themselves and their children are cited by survivors as one of the top reasons why they stayed with their abuser for as long as they did. Financial or economic abuse, while possibly a lesser known form of domestic abuse, is actually one of the most powerful control tactics abusers use to keep their victims trapped in the relationship and isolated from friends and family. Financial abuse typically goes hand in hand with other forms of domestic violence, including physical assault and emotional or psychological abuse. Research indicates that virtually all (98%) abusive relationships contain some form of financial abuse.