Transcendent Media Capital Ltd is a global media production and consulting company, which specialises in the production of entertainment content focusing on high-quality social and environmental impact stories, in the form of feature films, short-films, documentary, digital and social media products, television, games, web apps, music and print media. One of our current main projects is Free Yourself Global.. This campaign, “Free Yourself: Healing Families; Ending Domestic Violence” explores the enculturation of violence through families across the globe, and how does one, whether the abuser or the abused, interrupt the pattern of violence? In line with this year’s International Women’s Day theme, #BeBoldForChange, Transcendent Media Capital is taking another step towards progressing the gender agenda by partnering with Hestia Charity as one of our important partners in combating domestic violence worldwide. Together we aim to reach survivors of domestic and sexual abuse and families of victims of femicide throughout the UK. We will record their stories, enabling us to increase depth of understanding about these issues, give survivors and victims’ families a voice to assist in healing and help inform policy makers.

Hestia is a charity working with vulnerable adults and children to change their lives. We do this through a range of services including support for those with mental health needs, those with physical or learning disabilities, ex-offenders looking to make a new start and also older people ensuring they stay active and independent.

We are the largest provider of domestic abuse refuges across London and manage 39 safe houses across the Capital. In 2015/16, we supported over 5000 women and children across our domestic abuse services. Our refuges provide a safe haven for mothers and their children – a home they can call their own while they rebuild their lives after the trauma of domestic abuse. As part of our domestic abuse services, our dedicated staff help survivors and their families to rebuild their lives, creating a stronger future for them in a safe and healthy environment. This includes finding a permanent home, managing their finances, taking care of their health, and accessing work, training or education. We also provide invaluable emotional support and ensure that survivors are able to access specialist counselling that benefits them and their children.

Our Children and Family Workers provide specific support for children. The work they do is to help with accessing new school places, providing emotional support that enables children to express their emotions, and supporting mothers and their children to rebuild their relationship, which is often damaged by their experience of domestic abuse. We are currently one of the only organisations in the UK who are committed to providing Children and Family Workers in all of our domestic abuse refuges.

In 2016, Hestia launched a mobile app called Bright Sky, aimed to support those who are experiencing domestic abuse or those concerned about someone they know. The app contains several questionnaires to access the safety and health status of a relationship, as well as a UK-wide directory of support services which users can search by GPS, postcode or are. Learn more about Bright Sky.

The UK SAYS NO MORE campaign

UK SAYS NO MORE is a nationwide campaign to raise awareness to end domestic violence and sexual assault. Launched in May 2016, the campaign is a partnership between London charity Hestia, and the NO MORE campaign in the US.

UK SAYS NO MORE aims to end the stigma and silence which often surround these issues by encouraging discussion, and in May launched two PSA campaign videos in collaboration with a number of well-known UK personalities including Alison Steadman, Jamal Edwards and Eddie Izzard.

UK SAYS NO MORE seeks to end common myths about domestic violence and sexual assault, sharing information about support services available, and working with a growing network of partner organisations across non-profit, government, arts, corporate and education, to raise awareness across the UK. Currently, UK SAYS NO MORE has partnered with almost 100 organisations. Behind the campaign is the belief that it is only by working together can we end domestic violence and sexual assault.

You can support UK SAYS NO MORE by:

Visit uksaysnomore.org today for more information on how to get involved! 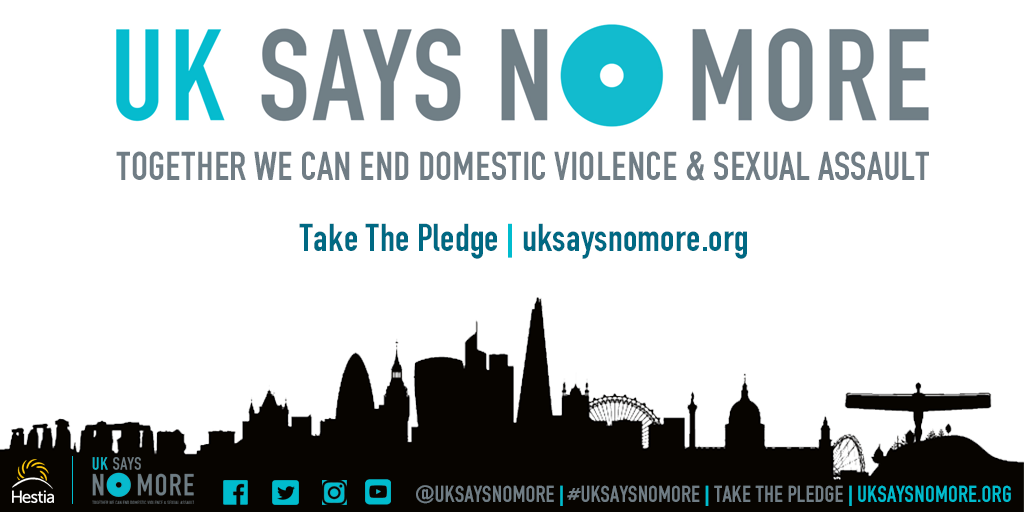