What are we really talking about when we discuss issues such as inequality or ecological impact or social impact? We are talking about sustainability. The rate at which we consume or fight over wealth and resources is now at unsustainable levels. This pertains even to the way in which we do business, it is changing, it has to. No longer is delivering shareholder returns enough. Our businesses have the biggest impacts to both our environment and our societies. Businesses drive the circulation of wealth, resource consumption and in/equalities within our societies. Our businesses produce the media content and stories that shape our perception of our planet and our place within it.

Kate Raworth, Senior Visiting Research Associate, Environmental Change Institute, Oxford University recently wrote about a new economic model that could help end inequality. This model was promoted by the World Economic Forum and looks like this: 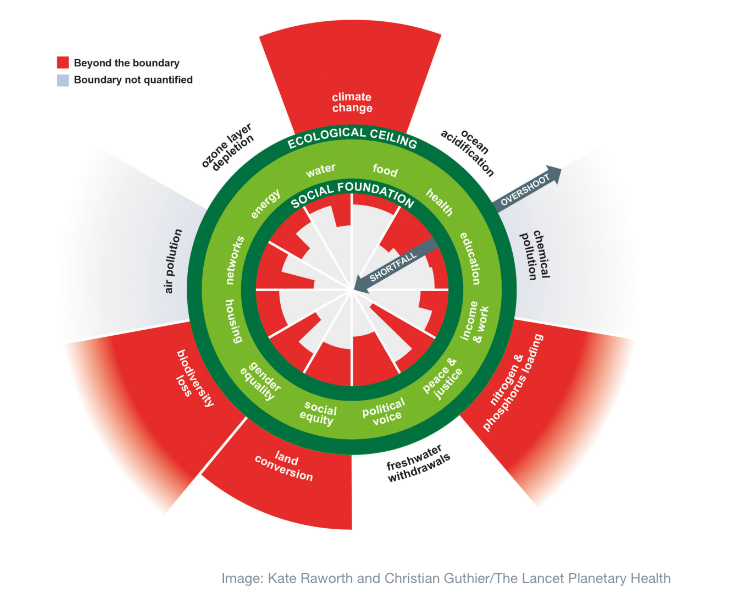 It is called the “Doughnut” of social and planetary boundaries and it could just turn out to be the compass we need for creating a safe and just 21st century. The hole at the Doughnut’s centre reveals the proportion of people worldwide falling short on life’s essentials, such as food, water, healthcare and political freedom of expression – and a big part of humanity’s challenge is to get everyone out of that hole. At the same time, however, we cannot afford to be overshooting the Doughnut’s outer crust if we are to safeguard Earth’s life-giving systems, such as a stable climate, healthy oceans and a protective ozone layer, on which all our wellbeing fundamentally depends.

Ms. Raworth refers to recent studies that have put the issue of inequality onto political and corporate tables – including Wilkinson and Pickett’s The Spirit Level, Oxfam’s annual billionaire calculations and Piketty’s Capital in the 21st Century – combined with the extraordinary rise of the 1%, the promise to tackle inequality now appears high on every policymaker’s list. We are daily offered “inclusive growth” and “an economy that works for everyone”. So what kind of economic mindset can help bring it about?

Students of economic theory for five decades have been taught economic models such as The Kuznets Curve, created by Simon Kuznet, which proffered the theory that that as economies grew, income inequality rose at first and then fell. Plotted on the page, it looked like an upside-down U. 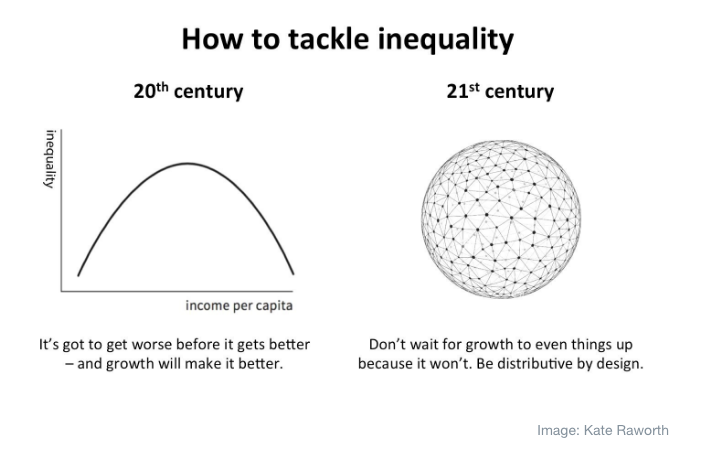 However there were problems with Kuznets Curve, as Kuznet himself admitted that his conclusion was based on “5 per cent empirical information and 95 per cent speculation, some of it possibly tainted by wishful thinking’, later adding that it should not be used for making “unwarranted dogmatic generalisations.”

However, the Curve was picked up and taught across economics schools for 50 years as it justified the 1% position that rising inequality is an inevitable stage on the journey towards economic success for all, essentially that if you want progress, inequality is inevitable. It’s got to get worse before it can get better and growth will (eventually) make it better. This in turn justified the implementation of a now outdated 20th Century austerity economics philosophy which only served to widen the inequality gap.

So what is the alternative? Ms Raworth discusses a distributive by design model that shares value far more equitably amongst all those who help to generate it. And thanks to the emergence of network technologies – particularly in digital communications and renewable energy generation – we have a far greater chance of making this happen than any generation before us. Raworth points to 5 key factors that economists have outlined in this distributive by design model

Land and resources: how can the value of Earth’s natural commonwealth be more equitably distributed: through land reform, land-value taxes, or by reclaiming land as a commons? And how could understanding our planet’s atmosphere and oceans as global commons far better distribute the global returns to their sustainable use?

Money creation: why endow commercial banks with the right to create money as interest-based debt, and leave them to reap the rents that flow from it? Money could alternatively be created by the state, or indeed by communities as complementary currencies: it’s time to create a monetary ecosystem that can fulfill this distributive potential.

Enterprise: what business design models – such as cooperatives and employee-owed companies – can best ensure that committed workers, not fickle shareholders, reap a far greater share of the value that they help to generate?

Technology: who will own the robots, and why should it be that way? Given that much basic research underlying automation and digitization has been publicly funded, should a share of the rewards not return to the public purse?

Many thought leaders including Marc J Epstein have written extensively about corporations social and environmental impacts and how to measure it, ergo have the capability to adjust their impacts. He states

In attempting to cure society’s ills, people from all walks of life are looking to the corporation to serve as more than a machine to generate shareholder values – if only because corporations have the money to do so. Witness how the failure of many schools to graduate literate teenagers creates pressure on companies to provide basic education

When Raworth talks about a distributive design model, this must also apply to how enterprises themselves are constructed and not just from a shareholder perspective. We must create a system where enterprises can increase their value by taking actions that have positive social and environmental impacts. In fact, consumers are now demanding these changes be made to the operations of businesses. We must also challenge our own assumptions that doing societies work should be left to underfunded NGO’s and charities. Challenge our believe that because NGO’s and charities do not have a share of the wealth their intentions and work have more integrity, which is underpinned by the belief that money corrupts. It is power that corrupts, as Lord Acton famously quoted “Power tends to corrupt, and absolute power corrupts absolutely.” Money is just a resource like our natural resources and it is the attempt to control the resources that corrupts, not money itself.

When you combine land and resources, money creation, enterprises, knowledge and technology as in Raworth’s distributive design model, this must in itself include the design of enterprises where there is value recognition from social and environmental work. Financial sustainability is also important and we need to find ways to be financially sustainable in ecologically and socially sustainable activities. After all, even if money were to be replaced by alternate currencies, there will always be a traded currency of a kind.