When the news broke of a man who’d apparently killed his mother, daughter, wife, and then himself in Nova Scotia, the media focused heavily on Post Traumatic Stress Disorder. Ardath Whynacht is a sociologist at Mount Allison University who works with inmates at two federal prisons, some of whom have committed violence against their partners. She says the media focus on PTSD was inappropriate and counterproductive.

She says “I think the most important question in a case like this is ‘what leads someone in distress to take their distress out on others?’ Because that question is foundational to understanding family violence. And if we want to talk about programs and services to prevent incidents like this, we need to be talking about not only trauma supports for all men, not just veterans, but we also need to be talking about the ways in which we socialize young men to take their distress out on others using anger and violence.”

… we also need to be talking about the ways in which we socialize young men to take their distress out on others using anger and violence.”

How does looking at gender help us understand what’s going on?

Social norms about gender help to shape the different ways that women and men cope with adult trauma and PTSD – including whether they become violent or not. Much of this understanding has come from work with male and female veterans who have PTSD. Observed differences between these men and women fit with what our society says are acceptable or normal ways for men and women express their distress.

Women: For female veterans, PTSD typically involves depression, numbing, avoidance, anxiety disorders and suicidal thoughts or actions – not usually violence, though they may have angry outburts.

However, when a male veteran becomes violent toward his partner, we should not attribute it to his PTSD without careful assessment. Irritability and outbursts of anger are common in PTSD, and some individuals may become physically violent when they are emotionally triggered, startled, or having a flashback. But violent behavior is not common, and there is no evidence that PTSD causes anyone to engage in a pattern of coercive control . 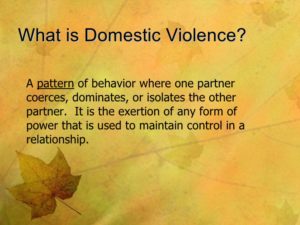