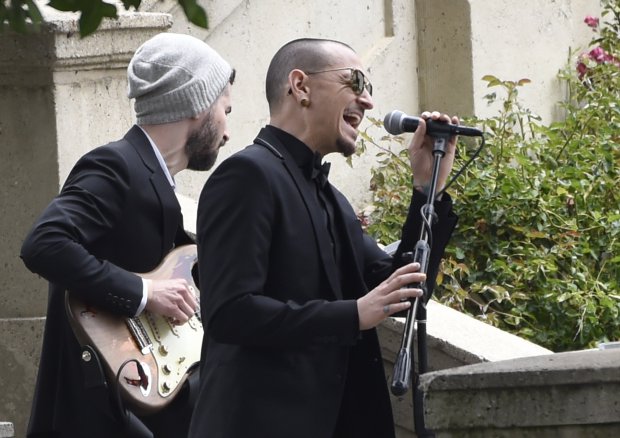 Many fans are shocked and heartbroken over the loss this week of Chester Bennington, the fierce lead singer for the rock band Linkin Park. Police say they are treating his death as a possible suicide, which would make the pain even harder to bear.There’s a famous saying, “When you have a hammer, everything looks like a nail.” That may be true. But in this case, as a clinical psychologist and researcher who specializes in trauma, I don’t think I’m overreaching in saying that his troubled past may have been a factor in his death. Chester Bennington had openly said he was a survivor of childhood sexual abuse that haunted him and, he said, contributed to his excessive use of drugs and alcohol. The singer is said to have struggled for years with alcohol and drug abuse, and has talked in the past about contemplating suicide as a result of being a victim of abuse as a child.

Bennington was molested from the age of seven until he was 13 by a friend who was a few years older than him. Previously speaking to Kerrang! magazine in 2014, the rock star explained: ‘It escalated from a touchy, curious, ‘what does this thing do’ into full-on, crazy violations. ‘I was getting beaten up and being forced to do things I didn’t want to do. It destroyed my self-confidence.  ‘I didn’t want people to think I was gay or that I was lying. It was a horrible experience.’ Chester has never identified his abuser. He also felt abandoned by his family, with his father Lee – a police detective who, coincidentally, focused on child abuse cases – working long hours and divorcing from Chester’s mother when he was 11. The trauma of his abuse plunged Bennington into a cycle of addiction, with his mother kicking him out of the house when he was 17 due to his drug use. This addiction got even worse during Chester’s career, with Linkin Park staging an intervention for him in 2016.
Survivors of childhood sexual abuse are at an increased risk of developing a wide range of medical, psychological, behavioral and sexual disorders. Indeed, a meta-analysis of published research on the effects of child sexual abuse verified the extensive and subsequent negative short- and long-term effects. For example, sexual trauma is related to psychiatric disorders, including post-traumatic stress disorder (PTSD), substance abuse and dependence, depression, anxiety and suicidal behavior. In addition, many male survivors of sexual abuse also have negative body image, revulsion to being touched or touching others, lack of confidence in their appeal and attractiveness, sexual dysfunction from low sexual desire to difficulties achieving and maintaining an erection and retarded ejaculation.
For far too long, boys and men who have been sexually abused or assaulted have been overlooked, neglected, minimized or stigmatized by society and, at times, by the health care community. It’s time for that disregard to stop. One study in the United States estimated that one in six males are sexually abused at some point during their childhood. Let’s stop and think about that for just a second. Picture all the boys and men you know, and then breathe that statistic in. That may include your father, your husband/lover, your boss, co-workers, coaches and friends. There are numerous barriers to men reporting sexual assault and getting the help they need. Internalization of socially acceptable norms and expectations for being a man, as well as knowledge-related barriers about abuse and assault, exist for these men. If you meet a male survivor or come to learn that someone you love was sexually abused or assaulted in childhood, please communicate to them that the abuse was not their fault, they didn’t ask for it to happen, and psychologically healthy adults or older children do not treat other people in that way. Tell them there is hope for their future.

It is imperative that children get the help and have the support that they need so that their trauma does not stay unpacked and continue to grow with them into adulthood, affecting their relationships and taking over their life. Our global domestic violence campaign “Free Yourself: Healing Families; Ending Domestic Violence”  looks at all types of abuse as well as their root causes/ factors. We recognize the way childhood trauma can continue to affect relationships later in life and the importance of  treating trauma at a young age in order to prevent a continuation of abuse. Specifically, this campaign explores the enculturation of violence through families over generations, and how does one, whether the abuser or the abused, interrupt the pattern of violence?

To share your story with us today, send us a facebook message or submit your story anonymously via our website – FreeYourselfGlobal.com. For more information on how to become involved in this breakthrough campaign, email info@freeyourselfglobal.com