A vague new child marriage law in Bangladesh invokes the parental permission loophole setting no minimum age for marriage — an astounding turn of events that has human rights groups up in arms. In spite of protests over the law in Jan., the government’s parliament has approved what is called the “Child Marriage Restraint Act 2017,” which allows girls under 18 to marry with parental consent and a court. The law sets no minimum age, for the parental consent clause. It merely states that a marriage may be granted for “special cases” that adhere to the “greater good of the adolescent. Bangladesh parliament approved the act in order to protect “girls honor” according to Reuters. This law is a devastating step backward for the fight against child marriage in Bangladesh, which has the highest rate of child marriage in Asia, and one of the highest rates in the world, with 52 percent of girls married before age 18, and 18 percent married before age 15. Under the previous law, the legal age of marriage was 18 for women and 21 for men, with no exceptions. 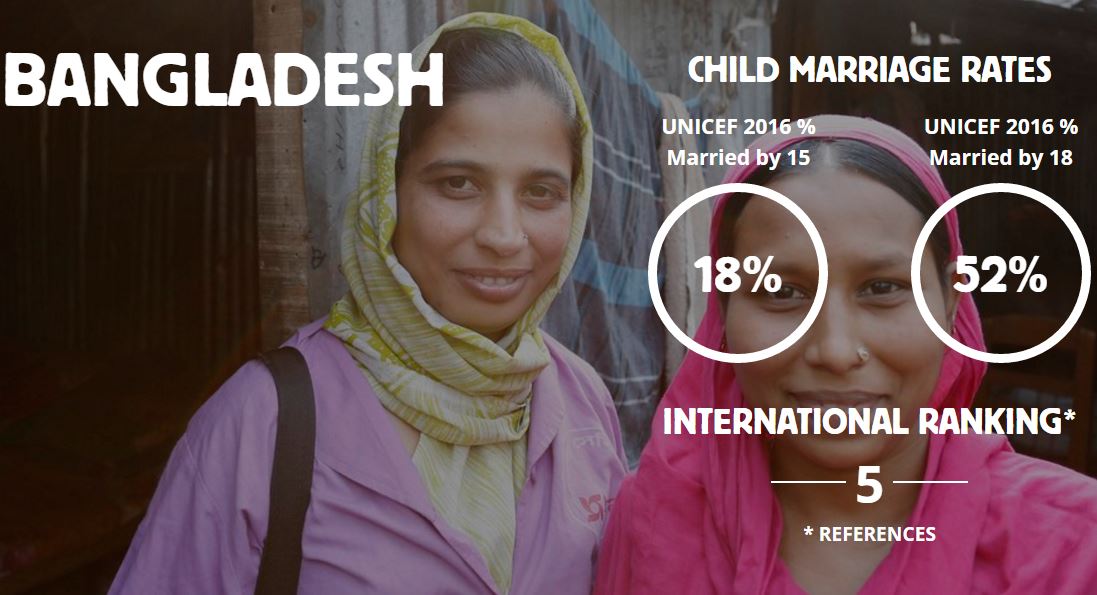 Girls in developing countries who marry before 18 are less likely to finish school, have higher rates of early pregnancy, and risks of life-threatening complications from giving birth too young, according to UNICEF.  Girls Not Brides, collective group of over 700 civil society organizations say the law could legitimize child rape and abuse. “We are concerned that this new act could lead to widespread abuse, legitimize statutory rape, allow parents to force their girls to marry their rapists, and further encourage the practice of child marriage in a country with one of the highest child marriage rates in the world,” said a statement from Girls Not Brides.

In 2017, it feels backwards for a country to be adding new legislation that legitimizes early marriage. More countries are working to close legal child marriage loopholes in the law. In the past year, Malawi, Zambia, Mozambique and Gambia have all taken major steps to close legal loopholes in child marriage laws. Tanzania could be next, and Bangladesh could learn a lesson here.

Child Marriage is a form of domestic violence; an epidemic that we are working to eradicate worldwide. “Free Yourself: Healing Families; Ending Domestic Violence”, is the first interactive global domestic violence campaign incorporating three core elements:

This campaign explores the enculturation of violence through families over generations, and how does one, whether the abuser or the abused, interrupt the pattern of violence? Our initiative hopes to bring together all of the voices of the participants of domestic violence, so whether you are a recovering abuser, victim/survivor and/or professional who works to aid in this cause, we want to hear your story. You can share it with us on social media using the hashtag #FreeYourselfGlobal or anonymously here, via our website.