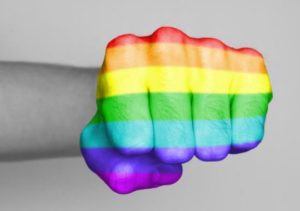 As you may know, October is Domestic Violence Awareness Month in the United States. Every year, those of us who find passion in working to end domestic violence come together to promote awareness by hosting events, writing articles, and leading campaigns such as #TakeAStand. Slightly less known, is that October is also LGBT History Month. Unfortunately, October is not the only time of the year that domestic violence and LGBT relationships come together. The truth is, research suggests that domestic violence impacts LGBTQ individuals at rates equal to or higher than those of cisgender heterosexual women (25-35 percent). The first nationwide study to break down domestic violence rates by self-identified sexual orientation found that lesbian and bisexual women are at higher risk than straight women, with bisexual women facing especially high rates. The study [PDF], conducted by the CDC in 2010 and released in 2013 found that 35% of straight women had experienced rape, physical violence, or stalking by a partner at some point in their lives. But 43.8% of lesbian women had experienced one of the three, as had a full 61.1% of bisexual women. Researchers interviewed a total of 9,709 women — 96.5% of them identified as straight, 2.2% as bisexual, and
1.3% as lesbian. Bisexual women like Amber Heard encounter unique stigma in their romantic relationships, facing significantly higher risks of physical and sexual violence than straight women or lesbians. It has much to do with the stereotypes that are lobbed at them: that they are hypersexual, fickle, untrustworthy and unfaithful – that their sexuality is illegitimate, a cover for promiscuity. These myths remain pervasive and abusers seize on them to demean their victims. In Canada, rates of sexual and physical assault were four times higher for bisexuals than they were heterosexuals, according to the 2004 General Social Survey: 28 per cent of bi people reported being victimized by spousal abuse, compared to 7 per cent of heterosexuals. Bisexual girls were more than twice as likely as heterosexual girls to report dating violence in the past year, 11 per cent versus 4 per cent, respectively, according to the 2013 BC Adolescent Health Survey of students ages 12 to 18. It is important for service providers to understand the unique ways in which LGBTQ people are stigmatized and discouraged from seeking services, so that we can develop strategies and alternate services that will better serve the population.