This season The Current has been holding public forums across the country, exploring various issues related to missing and murdered Indigenous women in Canada. Their fourth town hall which aired on March 1st focused on how children and youth are affected.

I hope everyone that’s out in wherever this is going, indigenous or non-indigenous realize that they have to listen to because this isn’t just an indigenous problem. Talk about the canoe – we’re all in the same canoe, we have to learn to paddle together.”

The inquiry will need to examine the complete picture in order to be effective, she added.

On Tuesday, Indigenous Affairs Minister Carolyn Bennett emphasized that the inquiry would need to examine the root causes of the violence, going beyond a mere tally of missing and murdered women.

The issue of domestic violence is still “almost routinely linked” to the effects of residential schools, as well as the effects of child abuse and the child welfare system, she noted.

“Unfortunately in some families, you will end up with the perpetrator and the victim,” Bennett said.

NWAC administrators said that the organization is going to continue its efforts to prevent violence against women from occurring including working on the systemic issues of sexual and domestic violence, as well as human and sex trafficking. 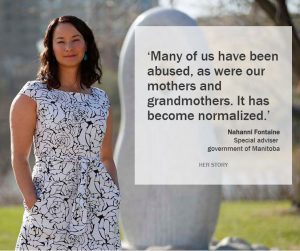 As a recent series in The Globe and Mail reported, a number of the murdered and missing women and girls were in foster care. A child-welfare system is an essential public service. In those rare occasions where parents are unable to ensure the safety and development of their children, the state must step in and provide alternative arrangements that will safeguard the interests of the children.

As the mandate for the inquiry on murdered and missing indigenous women takes shape, the government ought to consider the role systemic disadvantage plays in placing women and girls at higher risk for violence.  However, as the Truth and Reconciliation Commission pointed out, the system is not well-suited to the needs of indigenous children. It does not account for the multigenerational impacts of residential schools and inequitable services on reserves. This means First Nations families have less support to care for their children than other Canadians. This entails a dramatic overrepresentation of First Nations children in foster care. The problem is so severe that there are more First Nations children in foster care today than at the height of residential schools. Too often, indigenous children removed from their families are placed in non-indigenous foster homes and experience multiple placements. When that happens, indigenous children are not only separated from their families, but also from their culture and from their communities. Taken together, these circumstances place First Nations girls and women at greater risk for disadvantage, including violence. http://www.theglobeandmail.com/opinion/a-mmiw-inquiry-must-examine-the-child-welfare-system/article27549551/